Submit to this Journal

The objective of our study was to explore novel interactions that can be helpful in the self-assembly of polydimethyl siloxane (PDMS) macro-objects. In this approach, ionic self-assembly of polydiallyldimethylammonium chloride (PDDA) and deoxyguanosine monophosphate (dGMP) molecules were utilized for layer-by-layer (LbL) assembly with an exposed layer of dGMP. The exposed dGMP containing potential tetrahydrogen bonding groups were utilized for the macro-object assembly of PDMS in toluene and disassembly in an aprotic solvent like dimethyl sulfoxide (DMSO) through the breaking of H-bonding. The formation of layers over the surface was characterized by using atomic force microscopy (AFM). Moreover, the assembly-disassembly process was more thoroughly understood by force measurement analysis in different solvents by using a tensiometer instrument. This study will open up the gate for the utilization of further forces to assemble macro-objects by mimicking this approach.

Ionic self-assembly (ISA) has been emerged as a system for developing controlled nanostructures, it provides a simple method for producing functional materials through a collaborative process [1-3]. The synthesized nanostructures are considered advantageous to the counterparts (covalent in nature) because they make it easier to synthesize by providing mechanisms for property manipulation through the use of a wide range of charged building blocks (or tectons) [4]. By keeping in consideration the advantages of ionic assembly, an increasing attention is tilted towards biological building blocks as starting materials for ISA [5-7]. Ionic self-assembly [1, 8] and hydrogen bonding interaction [9-14] have been separately applied for the self-assembly process.

Herein, a cooperative approach is considered for the ionic interactions along with hydrogen bonding in a systematic way for self-assembly of macro-objects. By using the ionic self-assembly of deoxynucleotide monophosphates (dGMP) with cationic polymer polydiallyldimethylammonium chloride (PDDA) for preorganization of dGMP to form LBL self-assembly [21, 22] on polydimethyl siloxane (PDMS) building blocks. The latter moieties (dGMP) have number of hydrogen bonding accepting and/or donating sites highly capable of multiple bonding architectures, as a result, hydrogen bonding interactions between the building blocks are encouraged. After introducing the quartets H-bonding compound onto the surface of PDMS cubes, they were subjected to macroscopic assembly in non-polar to less polar solvent like n-hexane and toluene. While DMSO an aprotic solvent, was used to break the assembled structure. The assembly-disassembly procedure was carried out several times. Meanwhile, the assembly-disassembly process was more thoroughly understood by force measurement analysis in different solvents by using DCAT21 tensiometer instrument.

2.2. Preparation of PDMS cubes and its plasma treatment

Preparation of PDMS building blocks were carried out by slight modification in our previously developed method [20]. We have used a conventional method for the preparation of PDMS buildind blocks. PDMS pre-polymer, curing agent, and dye particles were mixed at a mass ratio of 10:1:1, stirred for 15 minutes to mix thoroughly. The mixture was evacuated to remove the entrapped bubbles in the mixture. After that it was poured into cylindrical holes of PMMA molds. The PMMA molds were tightly sandwiched between two hydrophobic glass substrates and heated at 65 oC overnight. Then, the PDMS cylinders were de-molded.

Afterward, treated every side of PDMS building blocks (5mmol) with plasma for 5 minute and then immediately immersed into the solution of (3-Aminopropyl)triethoxysilane (APTES) into ethanol, because of the migration of unreacted PDMS oligomers to the surface and the rearrangement of the PDMS polymer chain, the treated PDMS surface frequently regains its hydrophobic properties. They were kept in APTES solution until further use.

In order investigate the assembly-disassembly behavior on macroscopic scale, plasma treated building blocks were modified LBL self-assembly. We have modified the cubic building blocks with multiple coatings of PAA and PAH, and then mitigate the adhesions by introducing multiple layers of PDDA/PSS until there was no more adhesive forces present between the building blocks. It is important to mitigate the already present forces in order to avoid the interference in assembly process through h-bonding. After that employing the chemistry of 2′-deoxyguanosine 5’monophosphate (dGMP) for LBL self assembly. We have further added 10 bilayers of PDDA/dGMP onto the surface to introduce H-bonding containing moieties onto the surface. The concentration of dGMP was taken as 0.5 mg/ml.

The number and order of the multilayers are given as:

The fact that PDMS hydrophobic nature frequently hinders its applicability in a n of applications, including the formation of multilayers. A plasma treatment was applied to make the surface hydrophilic. Next, the building units were placed into APTES ethanol solution, the plasma treated PDMS surface may recover their hydrophobic properties, because of the migration of unreacted PDMS oligomers to the surface and the rearrangement of the PDMS polymer chain. AFM analysis reveals that the plasma-treated surface appreciably lessened it roughness with uniform grain size after modification with (PAH/PAA)20, (PDDA/PSS)15, and (PDDA/dGMP)10. Keep your text and graphic files separate until after the text has been formatted and styled. Do not use hard tabs, and limit use of hard returns to only one return at the end of a paragraph. Do not add any kind of pagination anywhere in the paper. Do not number text heads-the template will do that for you.

3.3. Assembly of macroscopic PDMS cubes through tetrahydrogen bonding of dGMP

3.4. Disassembly of macroscopic PDMS cubes through breaking of tetrahydrogen bonding of dGMP

In order to carry the assembly experiments, we have used toluene for the assembly and DMSO for the disassembly. But previously we know that the multilayers were not very stable in the organic solvents and can be ruptured or completely remove from the surface. So in order to stabilize the multilayers we have applied the plasma treated surface that can increase the adhesion strength between the multilayers and may be helpful to avoid the rupturing of the film, associated with the use of DMSO.

The use of aprotic solvent DMSO resulted in breaking of H-bonding and ultimately disassembly.

Fig. 3. Demonstarting the assembly of H-bonded building blcoks in toluene and disassembly in DMSO

3.5. Re-assembly of macroscopic PDMS cubes through tetrahydrogen bonding of dGMP

By utilizing this system, sometime we can get assembly-disassembly of building blocks but the re-assembly seems to be difficult. The reasons involved for the lack of re-assembly is either the presence of solvents on the surface or the rupturing of film from the surface.

To quantitatively validate the assembly-disassembly phenomenon, we used a one-of-a-kind in-situ force measurement method to determine the adhesive strength between assembled building blocks in different solvents. A tensiometer instrument was used to measure the force between interactive PDMS building blocks.

The assembly-disassembly phenomenon is understood further through in-situ force measurement. We have previously performed assembly experiments in toluene and disassembly them in DMSO. This phenomenon can be well proven by measuring the force values in respective solvent. I have measured the force in four different solvents varying in polarity i.e., water, DMSO, toluene and n-hexane.

The results obtained shows the fact that the force between the building blocks is higher in non-polar solvents, the average force measurement value were 0.35668 ± 0.149, 0.3211 ± 0.087, 0.102 ± 0.0405 and 0.00534 ± 0.00136 in n-hexane, toluene, water and DMSO respectively. The values of force measurement differ in different solvents. These values were higher in less polar solvent like n-hexane and toluene while considerably less in polar protic and aprotic solvent like water DMSO respectively. Less polar solvent will have less dielectric constant and hence allowing the hydrogen bonding between dGMP moieties. On the other hand, water is polar protic solvent, so the force value was higher when compared with less polar solvents. In case of aprotic solvent DMSO, will not allow H-bonding between dGMP, therefore, the force values were very less. 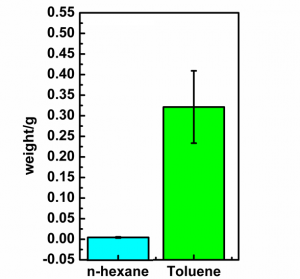 Fig. 4. Force measurement between the building blocks in different solvent at 120 seconds for the attachment

3.8. Role of time on force constant

Additionally, we have measured the force value through by another factor. The force measurement values show the fact that providing the long time for the assembly provides enough time for the building blocks to adjust the underneath flexible spacing coating and hence the interactive groups can form strong association at long attachment time.

The value of force measurement obtained at 20 seconds is 0.33 ± 0.09, while the force value decreased considerably to 0.07 ± 0.03 for 20 seconds. Hence it’s very clear that the providing higher time for assembly helps to deform the underneath flexible coating to allow enough interactive groups to come into contact. 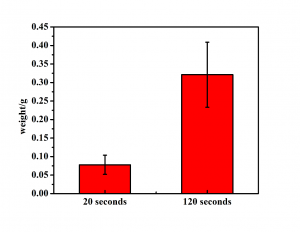 Fig. 5. Force measurement between the building blocks in toluene at 20, 120 seconds for the attachment

In summary, we have developed an assembly-disassembly system of macro-object by utilizing the reversible, multiple hydrogen bonding nature of dGMP. PDMS building blocks were used as a model system and employed the ionic self-assembly of deoxynucleotide monophosphates and PDDA to organize H-bonded groups onto the surface. Our results interpret the assembly-disassembly phenomenon, the non-polar to less polar solvents successfully assembled the building blocks, while aprotic solvent were used to disassemble them. The force measurement values in different solvents support this behavior.

Author’s Contribution: Whole contribution belongs to Dr. Anila Arshad. She has designed, performed and write up the manuscript.

Funding: The publication of this article was funded by no one.

Conflicts of Interest: The authors declare no conflict of interest.